CBG vs CBD – What’s the Difference? And Which One Is Better?

Written by The Hemp Jubilation Team

We include products we think are useful for our readers. If you buy through links on this page, we may earn a small commission. Here's our process.

CBG is capturing the interest of consumers and scientists alike. But what is the difference between them? And which one is better for you?

In this CBG vs CBD blog post, we will break down both cannabinoids and discuss their benefits like which one is better for anxiety or pain.

We will also recommend some of the best CBG products on the market!

What Is Cannabigerol (CBG)?

CBG is a cannabinoid derived from cannabis plants, just like regular CBD. However, its chemical origins are different.

CBG comes from CBGA or cannabigerolic acid via a chemical process called decarboxylation.

It turns out that CBG makes up less than 1 percent of the total cannabinoid content of hemp plants. By contrast, THC comprises between 25 and 30 percent of cannabinoids in the cannabis harvest, and CBD accounts for a further 20 to 25 percent.

Currently, the profound benefits of CBG are not widely known, so demand is not high. However, as more science comes through, this will change, and CBG-containing salves and tinctures will become increasingly desirable.

What Is Cannabidiol (CBD)?

CBD also comes from CBGA but through a totally different chemical pathway. CBGA converts into cannabidiol acid (CBDA) with the help of the CBDA synthase enzyme.

The enzyme facilitates a type of reaction called oxidative cyclization which changes the position of the hydroxyl group on the molecule. CBDA then converts in CBD via our old friend, decarboxylation.

CBGA is sometimes called the “mother of all cannabinoids” because it is the starting point for so many cannabinoid reactions. As mentioned, the reaction it undergoes to produce CBG is rare compared to the CBD-producing reaction.

As hemp plants grow, the enzyme CBDA synthase converts the majority of CBGA molecules into CBDA. Only a small fraction of CBGA goes through direct carboxylation into CBG.

They are also using science to determine the optimal CBG extraction window, harvesting plants when their CBGA content is high.

The Benefits Of CBD vs. CBG

Okay - now onto the topic that you care about the most: how CBG’s benefits stack up against CBD.

Before we get this discussion started, please note that the science of CBG is far less mature than CBD. In many cases, we don’t have a lot of experimental evidence backing up claims.

With that said, CBG appears to offer many of the same benefits as CBD.

For instance, studies suggest that CBG may:

CBD may also treat a range of conditions. These include:

What’s more, both of these compounds are what researchers call “benign”, meaning that they have low toxicity.

We simply don’t have the data to know whether CBG assists in these diseases as well. But as we found earlier, there seems to be an overlap between the two.

CBG vs CBD for Anxiety: Which Is Better?

If taken separately, CBG is potentially better than CBD for anxiety, though many believe they’re most effective when taken together.

On its own, CBG’s main advantage over CBD for anxiety is its ability to directly interact with your endocannabinoid system and its receptors. Studies suggest CBG’s interaction with your cannabinoid receptors causes potent anti-anxiety and muscle relaxing qualities rivaling THC and CBD.

Regarding both CBG and CBD for anxiety, CBG working alongside CBD may help boost CBD’s unique attributes with common anxiety disorder because of the entourage effect.

However, no concrete evidence supports one cannabinoid being better than the other with regards to relieving anxiety or promoting a more calm demeanor.

CBG vs CBD for Sleep: Which Is Better?

CBD is known for its calming properties, including relaxation. Taking CBD before bed can rest your body and mind to help you to obtain a peaceful sleep. Additionally, there are CBD sleep aids that combine CBD with sleep-inducing elements, such as melatonin that assist in sleep.

In terms of CBG, studies still need to be conducted to find out the effects CBG has on sleep. However, a combination of CBD and CBG may provide the Entourage Effect.

Through the Entourage Effect, cannabinoids synergize to keep your body balanced by engaging with chemical receptors throughout your Endocannabinoid System and together they may have more influence.

CBG vs CBD for Pain: Which Is Better?

CBD has been shown to be: anti-inflammatory, meaning it has the potential to reduce joint pain associated with arthritis.

And anti-oxidative, so it may reduce systematic inflammation by fighting oxidative stress and decrease symptoms of autoimmune conditions like lupus.

Until recently, how CBG was able to reduce pain in the body was relatively unknown. We now understand two things: CBG can directly cross the blood-brain barrier and can be thought of as simply the protective layer surrounding the brain, making sure unpleasant things do not get in.

And CBG directly influences the signaling mechanisms that indicate to the brain that you are in pain.

With the combination of CBG and CBD, you’re receiving two beneficial components. It is hard to say that either CBD or CBG is better than the other, but in combination, they may be more effective.

Which Is Better for You?

The results from using CBD, CBG, and other cannabinoids can vary based on your body type, lifestyle, and others, do they work better for you combined or on their own?

So, which one is better? That depends on you. And besides, you don’t have to choose. There’s plenty of products with both CBG and CBD.

And customers who have used both CBD and CBG report that combining them is far more effective than using them separately. The two cannabinoids actually are more powerful when they’re combined together.

They both naturally occur in hemp and share some of the same characteristics. However, they are still different in composition and offer unique benefits based on limited research.

You can then choose the products that best suit your needs and achieve your personal wellness goals.

What are the best CBG and CBD products?

Below are some of our favorite products that contain both CBG and CBD: 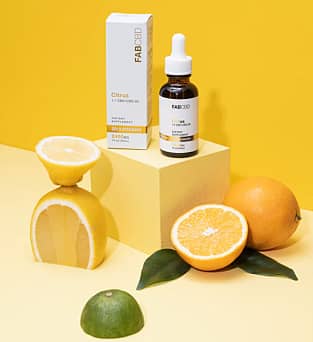 This advanced 2400mg, FAB CBD+CBG Oil is superior strength for helping relieve pain providing you with a 1:1 ratio of CBD (cannabidiol) to CBG (cannabigerol).

With high concentrates of full-spectrum extract and delicious, citrus and mint natural flavors two of the most popular flavors. These oils are sure to please any CBD lover.

All of their formulations are driven by science, innovation, and attention to customer needs to provide a heightened experience to give your mind and body what it deserves through not just one cannabinoid, but through many.

We think it’s the best option for people who want a bright, refreshing, and potent, high-quality full-spectrum CBD+CBG oil for daily comfort. 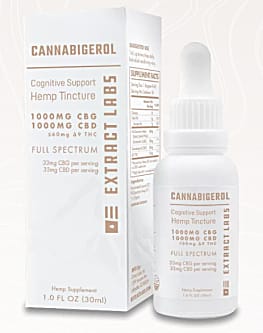 This tincture features 1000mg CBG and 1000mg CBD per 30 mL bottle and it's good support for those who are looking to mentally unwind and physically relax.

Extract Labs offers a 50% discount for qualifying individuals such as veterans, active military, teachers, first responders, healthcare workers, those on disability and lower-income to make their products accessible to all.

We think it’s the best option for people who want a top-quality naturally flavored formula that brings consistent calmness and relaxation when the anxiety kicks in.

The Uplift balanced CBG and CBD oil by Bluebird Botanicals is a great choice for those who are looking for something to provide an uplifting effect to your mornings and the whole day. 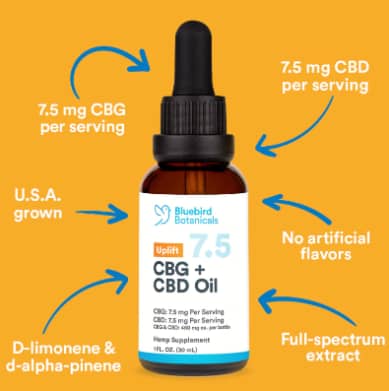 It’s also a great choice for those who are experiencing brain fog or just need a little bit of a push to reach mental clarity and a sense of clearness to the mind and energy to effortlessly get through your day.

And with its affordable price point and delightful flavor, it’s truly a product that’s worth giving a try!

We think it’s the best option for people who want a full-spectrum CBG + CBD Oil that features minor cannabinoids and terpenes specifically formulated to provide an uplifting effect and be greeted with mental clarity, feelings of calmness and contentment, and ready to focus on the tasks at hand.

If you’re looking for a super blend 2:1 wellness tincture, then this is the one for you! This broad-spectrum CBG oil is Medically Reviewed by Dr. John Rackham. 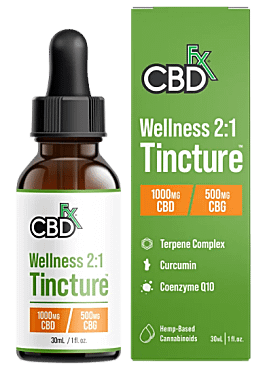 This oil is organically grown, enhanced with CBDfx’s proprietary 18 terpene blend, and has added antioxidants of curcumin and coenzyme Q10 to help boost the therapeutic benefits and provide you with the wellness results you’re looking for all while being THC free.

The CBDfx wellness tincture has a ratio of 2000mg of CBD and 1000mg of CBG per bottle, but depending on your preferred dosage level, other options are available.

Your options are regular strength (500mg), extra strength (1000mg), maximum strength plus (4000mg), and ultra strength (6000mg). An easily accessible product for newbies all the way up to seasoned users!

We think it’s the best option for people who want a THC-free CBG + CBD Oil that features minor cannabinoids and terpenes and has added antioxidants to battle pain and inflammation or need calmness in their daily life.

Does CBG Cause Side Effects?

Now, we know what you’re thinking: THC - the psychoactive molecule in hemp - also binds to these sites. So does that mean that CBG can make you high?

Not likely. Early evidence suggests that CBG blocks the action of THC and does not produce a psychoactive effect of its own.

Instead, it more closely resembles the body’s own endocannabinoids, effectively eliminating the risk of psychoactive response. Furthermore, CBG, like CBD, appears to block the action of THC on the nervous system because of its ability to bind preferentially. So it may inhibit psychoactive effects.

So far, we don’t have much clinical information about the effects of CBG on people. However, early indications suggest that it is well-tolerated in rats. It does not appear to cause them to experience psychoactive episodes, as they might if researchers gave them THC.

Does CBG Interact With Medications?

We don’t yet know a great deal about how CBG interacts with prescription and over-the-counter medications.

However, there are suggestions that CBD may affect the rate at which the body processes traditional medications by inhibiting an enzyme that breaks them down. So something similar could happen after consuming CBG.

Medicines may stay in the body longer (implying that CBG users should take a lower dosage). As always, speak to your doctor if you’re taking any cannabinoids in conjunction with regular medications.

CBG and CBD are chemically two different compounds. And they interact with the body’s endocannabinoid system through fundamentally different pathways. CBD activates the production of the body’s own cannabinoids while CBG binds directly to cannabinoid sites.

In conclusion, CBG vs CBD: Which is better? There’s no simple answer to this question since both CBD and CBG offer unique benefits.

However, we can break down the key differences between these two cannabinoids to help you decide which one is right for you.

CBG, or cannabigerol, is a non-psychoactive cannabinoid that’s thought to offer a variety of potential health benefits, including reducing inflammation and pain.

CBD, or cannabidiol, is another non-psychoactive cannabinoid with a wide range of potential health benefits, including reducing anxiety and improving sleep.

CBD and CBG have been shown to be effective together. They battle inflammation, bodily and mental discomfort, sleeplessness, and a variety of other ailments.

Customers who have used both CBD and CBG report that combining them is far more effective than using them separately.

Whichever product you choose, always remember to look for third-party lab reports, and if you take any medication, make an appointment with your doctor first.

What is CBD? What It Does, Are CBD Products Safe To Consume

How To Use CBD For Anxiety To Get The Best Results

What Is CBD Coffee? It’s Sure To Bring Unique Benefits

Does CBD Get You High? What Will CBD Feel Like?